Hey guys! Did you guys do anything fun during mid semester break? I went to Chicago and West Lafayette which is in Indiana to visit my friends! Here is a blog for my trip~ I left Wednesday night and took a red eye flight to O’Hare International Airport and transfer to Indianapolis International airport.

I went to a lecture in Purdue, cuz my friend has a lecture in the morning and he doesn’t want to miss it. That why I went with him and sat in the lecture room. I sat there. I listen. I don’t understand anything. HOWEVER it’s okay, I am not a CS major. In return my friend took me to a Korean restaurant that night for dinner. IT TASTES SO GOOD.

I stayed in Purdue for a night, then I took a shuttle to Chicago. That was the first time going there, but it was totally different from what I thought, I thought it would be busier, probably it’s too early in the morning, there are not many people in the street. I did not do anything special except walking downtown. Here are some pictures!!!

I had a pretty nice mid semester break even tho its short. HOWEVER if I got a chance, I would definitely go to West Lafayette again, cuz the Korean food is SO GOOD. I’ll see you guys next time when I’m traveling! XD -HEBE

Email ThisBlogThis!Share to TwitterShare to FacebookShare to Pinterest
Labels: Vacation

Hi everyone, it's Megan!

This week I’m going to be introducing you to my friend Sara Kinnari, who is also an international student
here at PLU. Sara is a junior this year, majoring in business administration. Her and I both grew up in
the same town, Stavanger, Norway. We even went to the same high school together, yet our paths never crossed ‘til we both came to PLU. It's a small world!

I wanted to give our international readers a better insight into what it's like to be an incoming freshman
at PLU. I've seen Sara grow as a person and student over the past year, and wanted to gain some
insight into her perspective. We spent the first part of our conversation reminiscing on the night we
met. Sara recalls it being one of the first memories of her PLU experience.
“It was during international NSO (New Student Orientation), when all the international students
went out to eat at the local restaurant, Farelli’s. After dinner, a group of us went to Target, and it was
like I slid right into an american lifestyle right away. Yeah, that was nice. Some of the friends I made
that night are my best friends to this day”, she says.

After some small talk, we got to the actual questions.

A lot of students are nervous about going to college, but the nerves take on a whole other level when you are studying abroad. Walk me through your first days as a Lute, how were you feeling?
When school started, I think it was harder for me to adapt than for a lot of other first-years. I was a transfer student, which meant that I had one year of university experience prior to coming to PLU. I came from a large school, where lectures were consumed by 200+ students and we didn’t have much of a social circle or environment at our campus. Coming to PLU felt a little more like high school, which I think is a benefit for new students that are just graduated from high school. PLU is a small school, so the professors care, and you see your friends around all the time, which I thought was nice. So, it was a transition, but I much prefer going to a smaller school where you have actual ties and friendships with the people around you, and your professors as well.

In Norway, we get our education paid for as part of our social benefit system. This is the case for a lot of other countries as well, so what influenced you to choose PLU rather than pursuing an education in Norway?
Well first of all, I chose to get my degree abroad because I value the experience just as much as the education portion. So even if I didn’t get my whole degree abroad, I would’ve at least traveled as an exchange student at some point. Other than that, my mother is PLU alumni, and my cousin who I’m close with graduated from PLU in 2016. So I had a lot of people close to me who had good experiences with the school, which is why I decided to apply for PLU.

If you could give one piece of advice for our prospective intl students, what would it be? Well, my first piece of advice would be to live on campus for at least a year. Living in dorms with a roommate is honestly the best way to get to know other PLU students outside of a classroom setting. I moved out of my dorm after a semester, but I really wish that I’d stayed on campus for another term. Secondly, I think getting an on-campus job is a really good way to make new friends. I got a job as a barista at our campus market, where I was able to make friends while also earning money. Lastly, I am the Vice President of the organization ANSA (Association for Norwegian Students Abroad), which has fostered connections and friendships between a lot of the Scandinavian students. If you’re a prospective Scandinavian student, I really recommend that you join ANSA. That way you have a foundational network of people who come from the same cultural background as you, which makes the whole transition easier.

I want to thank Sara so much for the interview, and I hope you guys enjoyed it!

Hello all. This is Camille


I hope the first few weeks of your classes have been treating you well.


I want to share with you about my first few weeks of school.

I started my clinical with OB (mother and baby). I felt ambivalent. I was excited about the opportunity for me to learn how to care for mom and infant/fetus during antepartum, labor delivery and postpartum period but I also have anxiety and fear about my incompetency to deal with such little and fragile babies who are precious to mom and family. I have doubt about myself. What if I accidentally hurt the baby as I have no experience at all handling babies. I didn't even know how to properly hold a baby.

Fortunately, I was assigned to an awesome and encouraging clinical instructor who helped get us oriented to the units, and she demonstrated a full infant assessment with one of my fellow students. In addition, she suggested a few strategies to calm a fussy baby. I was still nervous after all of the lessons so I seeked help from her and hoped that she would be able to supervise me while I performed the assessment. However, she said this to me: "You can do this! You know more than you think you do. You just need to be confident." Well, actually, that didn't really help me at the moment. I was still nervous and frightened. I remember one of the TED Talks that I watched a while ago suggesting "fake it until you make it." So yes, I faked the confidence and went into the room to receive the baby from mom, and did an assessment on her.

Did I know what I was doing? Yes! Like my clinical instructor said, I have the knowledge.

We are halfway done with the OB clinical. I am feeling more comfortable and confident for my assessment on baby and mother. For the most part, I don't feel anxious or nervous anymore, and I am truly confident providing care to mother and baby.

Sometimes, you just need to take the first step out of your comfort zone and swing it.

At the end, I want to share a video with you of me holding my baby sister for the first time. 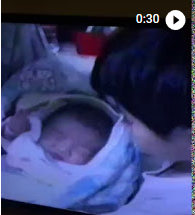 FYI, the boy-looking kid was me. My family asked me about my sister's name and her zodiac (they forced me to say it in English)