How much is "a lot" in American money? 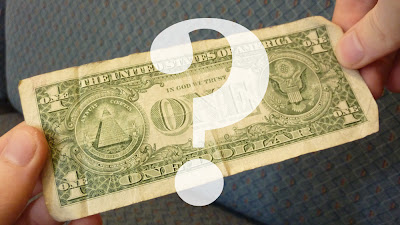 How do you manage your money when you don't know what they are worth?

You're standing in the store, looking at a sweater you really want. The price-tag says "20," and you have a 20-dollar bill in your hand. Can you really afford it? Is "20" a lot, or just a little? How do you tell?

That's what happened to me the first time I came to the United States. I had four 5-dollar bills in my wallet, but I had no idea if that was "a lot" or not. For the first few months, I just paid whatever the price-tag said, and didn't know whether I was spending too much.

See, back in Norway we pay in "kroner," and 5 kroner really isn't a lot of money. It's enough to get you a stick of bubble-gum, or a few pencils, but nothing more than that. So in my head, "5" has always been a really small amount of money.

But when i went to the United States, I had to train myself to think that "5" can actually buy you a lot of things. If you've got five dollars, you can get an awesome DVD, an unhealthy meal, a gift for mom, or a whole gallon of gas.

Tourists struggle with this problem all the time; the number on their money doesn't mean what they're used to. When I was in Italy, my friend and I paid 100,000 Lire for a hotel-room, which sounded like a fortune to us! In fact, we were really paying about 75 dollars.

...which I'll admit was still a fortune.

The first thing you should do is figure out the exchange rate between US Dollars and the money in your country. In other words, if a sandwich costs $2 in the United States, how much would you pay back home?

There are lots of websites that make this easy, such as this one. Just type in the amount in dollars, select your own currency, and it will tell you. You can also just ask Google, like I do.

Once you've done this a couple of times, you'll begin to develop a "feel" for how much your new money is worth, the same way you did back home.

When you figure out that the sweater actually costs 107 kroner, or 130元, you might go ahead and buy it anyway. But at least you'll know whether it's "a lot of money" to you, and whether you can afford it.